Don't come knockin at my door no mo! 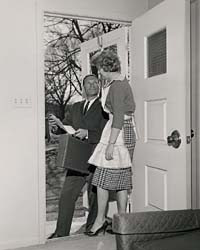 Last night I received a knock at the door. I was in the middle of getting dinner on the table to feed the ravaging hordes of kiddies swarming about my legs. It was a loud obnoxious knock of someone who either knows my family, or isn't bloody well likely to. It turned out to be the latter.

Even more annoying than telemarketers are door-to-door salesmen. Some guy was out promoting his business's wares. In this case, it was home security systems. He claimed to be promoting in this area and if I was willing to post his advert on my window, then he was willing to give me FOR FREE the system and installation at a savings of several hundreds of dollars.

I am sorry, but
1. I hate door-to-door salesmen.
2. When I tell you I am not interested, I will give you one freebie to continue with your promotion because I understand it's your job and you have been scripted.
3. If you fail to stop after the 2nd or 3rd hint, I am not going to be nice any more.
4. I gotta get a No Soliciting sign.

This guy was pointless, he wouldn't listen when I told him I was getting dinner on (hint, not a good time), when I wouldn't let him in my house to look at my back door (hint, why do you want to enter my house?), when I told him more than once that I wasn't interested (hint, I am not interested), and when I still was not interested (hint, still not interested). I finally had to shut the door on him. What I should have done is told him that if he showed up again I would shoot him in the foot, and under no circumstances would I ever buy from his company for the sole fact that he was a schmeckel and wouldn't leave me after I stated my disinterest.

It's decided, I am going invest in a door sign and a water pistol. If the sign doesn't discourage them, I am sure the water pistol will.
Posted by Candle Ends at 6:34 AM