Houdini does it again 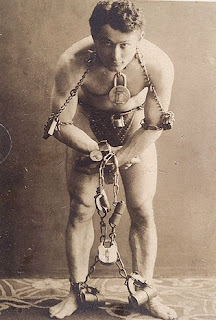 There are certain things that Misha REALLY enjoys. Cheese, bath-time, animals, and playing outside. With the mom either busy or ill this past little while and with spring fever evidently kicking in, Misha always enjoys outside time.

Yesterday I came home feeling somewhat ugh. The flu has run it's course through my family these past couple of weeks. I don't know if I got the flu or a cold bug, but yesterday I decided to come home early from work and rest. Feeling a little achy. When I got home I tried to rest in my room, but the wife, who still has a nice cough, wouldn't let me rest, so I relocated to the living room, taking Misha with me.

Alisa was doing her math homework, the Houseguest was doing something at the kitchen table. Misha was playing around. Kiril and Dasha asked if they could play outside to which I responded to the affirmative. Like all kids their attention to detail lacks something significant, and when the left the house, the front door was not securely shut.

I fell asleep finally but was rudely awoken. Kiril motioned me over to the front door. When I stood up and walked over, I beheld Misha in the arms of a strange couple. They had retrieved him from the center of the semi busy street just to the north of my house. Being still a bit groggy, I got my semi-profuse thanks and tried to figure out how it had happened seeing as how both Asya AND the Houseguest were sitting in view of the front door. It turned out that Asya had even closed the door when she saw it open.

This is the second time Misha has escaped and headed that direction. The first time, I was in the shower and Ira was surfing the net when the cat (who is not currently a housecat) appeared. She went to investigate and saw the door open and then went looking for Misha who was nearly to the same road.

Gonna have to buy a bell to tie around that kids neck...or a ankle monitor. Geez.
Posted by Candle Ends at 6:28 AM

Scary. I am having the same anxiety over Cael. Not that I think he would imagine going out on his own but if coaxed by a certain older brother, I could see it happening. On top of that I have had a dream that Cael was hit by a car. Scary.......Scary!

The answer is squeaky shoes. In most brands both shoes squeak, but you can take the squeaker out of one of them if it's too irritating :)