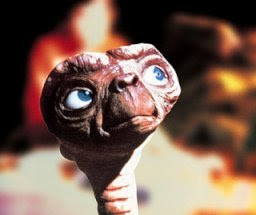 My mom says occasionally that Misha reminds her of E.T. He has a little scrawny neck with creases of skin like the picture. This week, he also figured out a word we have been working on forever. I am not sure if it was a motor skills thing or he never made the connection, but he is finally signing "ouch". And, he seems to have made the connection with things that hurt. For instance, when I was getting him into his car seat this morning, I must have sat him wrong or something cause he started to "pain" whine and when I asked him what was wrong, he showed me "ouch". When he went for a walk with Ira the other day, he kept wanting to go into the street, but she would stop him and tell him that there were cars that drove on the street. Ira has explained this before and also that he could get hurt. So she was surprised and pleased when he signed "ouch".

I am excited for Misha to get the next two Signing Time DVDs next week. He has been watching and enjoying thoroughly enjoying 1 & 2. I think he is in a state of mind to pick up some new ones.

Ira made me take her up to the Living Traditions festival in SLC. Basically it consists of me loading the puppet theater into the van, driving her up, setting up the theater, doing puppet shows with her for 3 hours for a bunch of rowdy school kids
Posted by Candle Ends at 4:44 PM

Congrats on the new and very important sign! We love, love, love the Signing Time series. We have several DVD's and have also TIVO'd a bunch of episodes which are on PBS on weekday mornings.