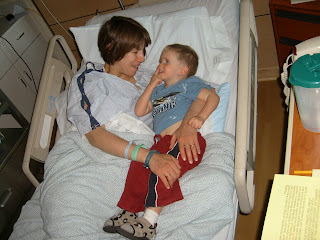 Misha has picked up on the baby thing. When he sees Kolya, or we are talking about him, Misha will say "bee-bee". That kid may not be able to express himself as fully as another kid, but he understands alot more than he lets on.
Posted by Candle Ends at 9:34 AM

I haven't seen the baby yet, so it still seems weird to me that he is a big brother now. Don't suppose you guys will be at Mom and Dad's on Sunday. If not, maybe I can swing by your house and take a peek at the baby. If I don't see you, Happy Father's Day!

Congratulations on your new baby. Josh is a June baby, too. I love the pic of you and Misha. I had a dream of Josh in my hospital bed after I had given birth to #2. The pic just reminded me of that. However, mine was just a dream. The picture just made me smile.
Again, congratulations.

Congratulations on the new baby! Misha's signing and saying "bee bee' is amazing! Keep up the great work.