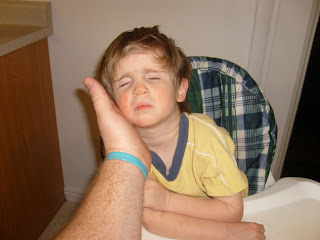 School has been good for Misha. I think it very helpful for him to be in a different environment, with different people, and a different regime. So, for 4 days a week he misses his nap. The bus comes a bit before noon and brings him back around 4. Nap time is usually around 11 a.m.. So, when he doesn't get his nap, he tends to get a bit sleepy around dinner time. The picture is after trying to wake him up for a few minutes. It took several more and sticking a plate of food under him in order to rouse him enough to eat.

But school has been good. He really enjoys riding on the bus. They send a laminated page home everyday with a report. It has the snack options he had (sometimes those are visible on his face), the activities he participated in that day, and with which therapists he had time with. At the end an option explaining what kind of day he had. Misha has never come home with anything but "I had a good day, today." He has started another round of gains. Ira noticed that he was able to put pegs toys in the foam holes without problem. He has picked up several words and sounds. He tries to sound out the letters he studies in class. He even signs more. When we went outside the other day, he started signing something and it took me a minute to understand that he was signing "snow". He also tries butterfly which is a difficult one. The other day, I was lounging on the floor doing homework with the kids. Misha crawled up on my back and was sitting there bouncing. Baba Liza asked where he was going and he answered with a sign. She didn't understand it, but repeated it for me. He was signing "horse".
Posted by Candle Ends at 3:57 PM

We just love hearing about Misha and all of the AMAZING things he is doing.

We love you Mish!

Oh he is sooo cute! I feel that way at dinner time too! ahha

Dang. I miss your whole clan.