Misha went to the dentist yesterday. He had a bit of decay on one molar and we thought it best to take him in. The other kids went in too. Asya has a canine that is coming in slowly through the gum, Kiril may have had some gunk but didn't, and Dasha had a little brown spot they drilled out and filled. He looked at Misha first, but decided to save his for last, so he got to watch the other kids go under the lamp. He was watching intermittently, signing "ouch" occasionally, and complaining the whole time. Then it was his turn.
The dentist, who is really good, sent Ira and the kids out. I got into the chair with Misha. I put his feet in between my legs, held, his hands against his chest with one hand, and held his head with the other. I thought I would be humane and also closed his eyes. He screamed the entire procedure which took just a few minutes. It's bad enough trying to brush his teeth, but this was torture for him. They didn't even have to deaden him. But he got a little revenge. A couple times he was able to chomp down on the dentists finger. Not that he did it on purpose, but hey...whatta ya do. He has been complaining to us about it ever since. He points to his mouth and lets us know that he knows it's all our fault that the mean ole dentist got a hold of him. 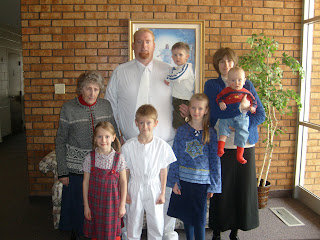 In other news, Kiril got baptised on Saturday. Yay. It was a fun day. We delayed it so that Baba Liza could attend. It went well. Kiril was excited. He got baptised with his friend Conner. And we had a banana split bar afterwards to celebrate.

I am working on putting tile in the master bath this week. Wheee. Will be so glad when it's done. Can't wait to be able to use my own bathroom and shower again. Also started biking to work again. Not too shabby after a break of a few months.
Posted by Candle Ends at 7:40 PM

Dentists...you either love them or hate them. Poor Misha.

So....I totally forget it was Kiril's baptism. He will be getting something in the mail soon from us.

He has had his fill of going to the doctor for his short years. I can understand why he doesn't like them.