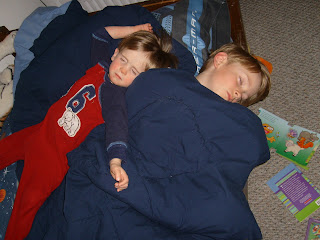 The past two Mondays, Misha had an evaluation with the local school district to see if he qualified for Early Head Start and, if so, for which services. We were shocked, surprised, and utter gobsmacked when they told us he qualified. And if you believe that, I got some prime beachfront property in Siberia I wanna sell ya.

We knew he would qualify and for anything/everything they have to offer. The eval center was located in the basement of Kids on the Move (local early intervention) so Misha was upset, I think, that we went there instead of class. In fact, while we were waiting in the foyer, he kept signing bye-bye and trying to escape. On both occasions, he acted out somewhat in the beginning by trying to get down, doing his frustration yell, and dropping stuff on the floor. He did settle down and go through the evals. I would tell him that it was time to "work" like he does at kids on the move. And he had them trained very well to keep him supplied with goldfish and cereal for "working". He scored from 1-8 percentile in the various categories (gross and fine motor skills, cognative, speech, etc.).

I thought that maybe I would feel sad or disappointed or something about that, but I haven't. I came to terms with the whole "special needs" thing a long time ago. Misha is a fun and wonderful kid and I have seen great progress in him, especially of late. Kinda like the IQ tests you can take, these scores are not indicative of what he really can do. His vocabulary is increasing greatly. He is gaining confidence in climbing on things. He runs quicker and more stable. His jumping is actually looking somewhat like a jump instead of a squat. He is able to reason things out better, like how to escape from the backyard while his sibs are supposed to be watching him.

Still, I came away from the evals with things to work on. Jumping is one, some fine motor skills like picking up a coin and putting it into a slot. Bigger-smaller concepts, colors, accurate pointing. The list goes on.

I also came away with the understanding that Misha needs more English. So I decided to start talking to him in English instead of Russian. Some things he understands when I say them to him, but others he looks at me like I am speaking gibberish. I am excited for him to start school in a month. He will get a big kick out of the school bus, and I hope likes the class. It will be a big growth experience for him.

Asya has turned out to be a great help with Misha too. She is old enough to be able to watch him, unless she is distracted, which isn't that hard. She can take him on walks, play with him in the park, read him stories, and turn on Signing Time. She even changes an occasional diaper and last night got him ready for bed (including brushing his teeth) while I was doing piano with Kiril.

The pic above is a retro Misha. A few months ago, before we got the bunk beds, Misha would crawl into bed with Kiril every night and occasionally scoot Kiril or himself right off. Ira likes this one cause Kiril is hanging off the side of the bed.
Posted by Candle Ends at 8:17 PM

The bus....so excited for the bus. Do they come pick him up at your house? That would be really convenient.

Gabe is such a big helper to. I have him "go-fur"ing all over the place. It's great. Maybe, by the time we have another, he will be able to change diapers too.

Yah, they will pick him up and drop him off. It will be interesting to see how he adjusts.