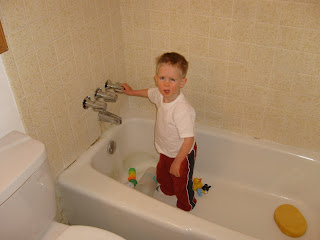 It's been a couple of busy weeks. I haven't found the time to pull pics from the camera and blog. Even now, while I am just getting started, Ira is trying to get me to go play with a sprinkler. She is never happy with how the sprinklers are sprinkling. sigh...So this will be a photo blog with comments.

This is Misha's new favorite activity. Whenever he gets a chance, he climbs into the bathtub to play. At least he isn't splashing around in the toilet. 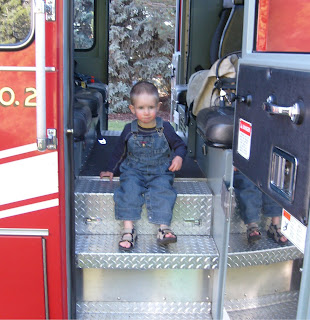 Ira had just had Kolya (Nikolai) and shooed me out of the house with the kids that weekend to go to Family City, USA festival. As usual, when the carnies arrive so do the freaks. But Misha took a rest in a firetruck while the kids where getting motion sickness on the carnival rides. Misha and I didn't right, but hung around the play area and distributed tickets to the munchkins. 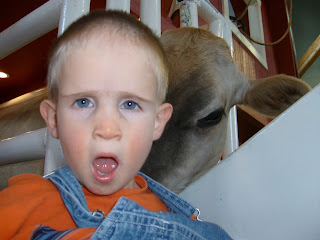 Misha had a field trip with Kids on the Move one of the local attractions--Thanksgiving Point's Animal Farm. Ira kicked me out of the house again and told me to take pictures. So trying to get a picture of Misha and the cow, I had Asya take a picture while I held Misha. She got the cow's nose and Misha's elbow. Then Kiril tried and got Misha's elbow and the cow's eye. Finally I had Kiril hold Misha while I snapped this one. While I am taking the picture and Misha is making a funny face, Kiril is getting licked up side the head by a friendly jersey cow. Now he really knows what a "cowlick" means. Goo all over his head. 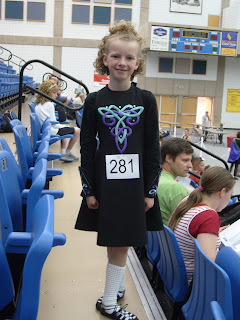 Asya had her first competition at the Utah Fies. We were worried that she wouldn't do well cause she wasn't practicing as she ought ta'. But she actually did well. She pulled 1 gold for her 3-hand team, a silver for her 8-hand team, a gold for a single jig, and a silver for the slip jig. And she got two medals for it being her first fies. It was a long two days. Friday night was the group competition in SLC, then Saturday morning was the singles competition. Then we had a wedding in SLC that evening, then Baba Liza flew in (was supposed to be her at 11 p.m. but arrived at 1:15 a.m.) At any rate, WAY TO GO, ASYA!

She, of course, forgot her shoes at the competition which we had to hunt down later. 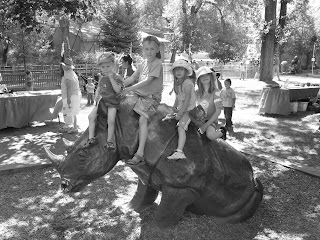 Our traditional zoo photo on the rhino.
Posted by Candle Ends at 7:48 PM 5 comments: