Ira kicked me out of the house with the kids a couple of weekends ago. Told me to get lost for a few hours so she could study for her citizenship test.

We decided to go see "Wall*E" at the dollar theater. None of us had seen it before, though we had heard it was a keeper.

I was somewhat apprehensive though, cause "kids" included Misha this time. We have never taken him to a theater before and in general, he never watches more that a couple minutes of any movie at a time with the exception of Signing Time, for which he will sit glued to the screen for however many we put on in a row. Occasionally, he will flop down on the blankets with the other kids when they are watching something, but never for very long.

Admission for the 5 of us was $6.25. The refreshments were around $20. I figured that we don't go often, why not splurge. And I figured that it was the only way I was going to get Misha to sit there for the 97 minutes + trailers. So, I got a popcorn and drink for Misha and myself, and a popcorn and drink for the other kids to share. Steadily, for over an hour, I kept a constant stream of salted, buttered, exploded popcorn kernels and high-fructose corn syrupy, artificially flavored beverage moving over his lips, down his throat, and into his belly.

When that ran out somewhere between 2/3 and 3/4 of the way into the movie, the church training kicked in. So between the full belly, the sugar high, the dark theater, the loud speakers, the huge bright screen, and the knowledge that he was not getting off my lap for any reason we made it through the rest of the film exceptionally well. He even laughed at some stuff in the film, but not sure for what reason. His sense of humor exists but the oddest things set him off. For instance, the telephone/power lines on the side of the street send him into hysterical bouts laughter when we drive down the road as does any picture of Disney Princesses.

What I want to try next is buying the flick on DVD and seeing if he will watch it. Then he could watch something other than Signing Time, which the other kids have memorized.
Posted by Candle Ends at 11:11 AM 2 comments: 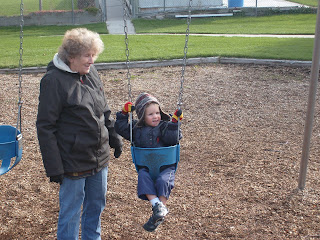 With recent posts on Whitney's (and others') blogs as well as observing Misha, I am reminded how constantly and pleasantly surprised I am at how much I underestimate our 1p36ers intellectually and otherwise. Despite disabilities, they have a great capacity to learn and love. I am looking forward to the next 3 years.
Posted by Candle Ends at 6:25 PM 3 comments:

We had a meeting a couple days ago at Misha's preschool. He will be starting 4 days a week the day after his birthday next Monday...assuming that Ira can get things settled in her head and with the district. She wants him to goto the morning class instead of the afternoon class cause that would completely mess with Misha's nap schedule. He still takes 1-3 hour naps in the afternoons.

So, she got Misha's pediatrician to write a note which she then had to take to the district office. When she got to the district, she fell in a giant nest of bureaucracy which, being native Russian, she should be used to by now. Eventually, they told her that she had two choices. She could have the afternoon schedule with a bus to pick Misha up or she could have the morning schedule without the bus. For some reason, she got all worked up over it. I think she thinks that she is doing them a favor putting Misha in the class instead of the other way 'round. Sigh. Sometimes I just don't understand.

Anyway, we met Misha's teacher and the therapists that will be working with him sans the speech therapist who was sick that day. Every time we meet with anyone about Misha, they offer us the same stupid booklet and we have to sign saying they offered it to us. Then we sign more things, and more things, and more things. I think I am just going to get a stamp of my signature...it will be easier that way. The dumb thing was that all they told us...in triplicate, was that they wouldn't really set an IEP for Misha now but would wait 30 days in order to observe him first. I am not sure what Ira would have wanted but for me a phone call would have sufficed to tell me that. A meeting once the observation is complete..sure. I hate bureaucracy.

Misha's teacher is a quiet spoken lady of middle years who got into the special ed program because her son is autistic. A score of years ago, when he was born there wasn't anything close to the amount of resources available for parents. Kudos for her though. I think school will be fun for Misha and beneficial.
Posted by Candle Ends at 6:01 AM 3 comments: