Misha's school had a field trip to the dinosaur museum that Thanksgiving Point. I got off work early to take him and also dragged along my new toy--Nikon D3000. So here are some pictures: 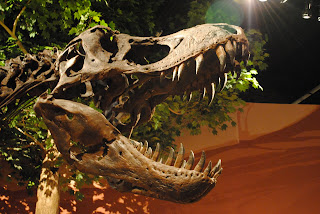 Aside from bolting toward the nearest exit the first time he saw a dinosaur, Misha mostly ignored the bones. He was more interested in the fence, or the fishes in the water, or the emergency doors and light switches. 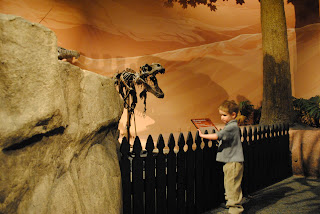 Unless it was the erosion table. He would have played in there for hours if I hadn't have dragged him away. 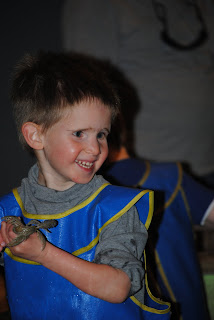 He was keen on the prehistoric fish: 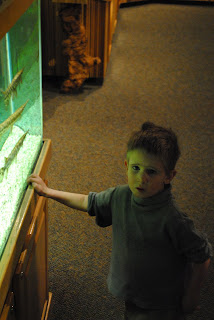 The giant shark didn't even phase him: 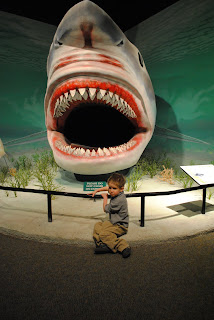 And played for a while in the sand pit. He is good buddies with one of his instructors: 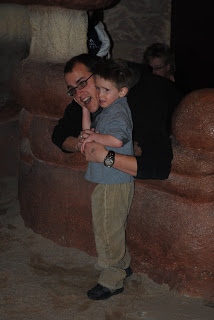 But his favorite part of the day was getting windblown when we were leaving: 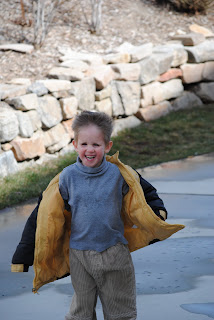 My brother reminded me I have been remiss in blogging. So I am repenting.

My reason for not blogging is I really don't have much to say. It's all busy, busy, busy doing the mundane work-a-day things and nothing special, exciting, or awful to report.

Misha--still going to Giant Steps. He really enjoys it. He enjoys going. Enjoys being there. Enjoys coming home. Enjoys trips in the car. Hates coming home from those. He has turned into a parrot. He is in the phase of speech development where he repeats (or tries to) whatever word you say last. That makes two of those in the house. He is getting daredevilish at the park. He fell 5-6 ft twice last time we went. Once he climbed up a ladder and couldn't get down and fell while I was walking over to help. He likes to reach out and snag a monkey bar and hang there swinging back and forth. Sometimes he can get back onto the platform, other times he falls. I caught him a couple of times but the last time, he was over there by himself and plopped into the wood chips.

Nicolai--quite a character. He is talking a lot and has realized that Misha is fun to bug or bully. We have to rein him occasionally. But he also shares with Misha and is excited when he comes home on the bus. He really like Baba Cindy and cries for her sometimes. One of his best friends there is Baba T. He brings her her book, movies, helps her walk down the hall, helps her to her chair, gives her hugs, etc. He is going through nursery initiation which means that one of use has to spend some quality time in Nursery each week. He is learning though. Once snack time hits, he could care less who is in the room with him.

Dasha--Ever read the poem "There was a little girl, she had a little curl..." That is Dasha. When she is good, she is very, very good. But when she is bad she is horrid. Not really. She has her ultra-whiny moments but for the most part is very helpful and patient while we work on her eczema. We have been to an allergist and are going to go for a round of blood tests and then to a dietitian.

Kiril--Usual energizer bunny energy. My mother's cousin Kirk was over a couple of Sunday's ago and Kiril talked his ear off. He is interested in everything at once...as long as it doesn't include work.

Asya--Same as usual. Constantly with her nose in a book.

Ira--her new thing is wooden figures that she designs, cuts out, sands, burns, paints and now is selling on irishenciya.etsy.com. As with anytime she gets bitten by a new art bug, she spends all her time and energy on it.

Me--not much. Work and more work. Running and biking. Working. Some play when I get a chance. whee.
Posted by Candle Ends at 11:34 AM 3 comments: